Giving up the keys to the car is one of life’s most difficult transitions for many seniors.  It represents the loss of independence. Something none of us want to give up.  Many seniors also fear isolation so losing the ability to drive can have a significant impact both socially and psychologically.

While transportation options vary by location, they’re oftentimes difficult to coordinate and arrange for when you actually need a ride.  Rideshare companies like Uber and Lyft have cemented their position as the future of transportation and have shown us that there is a real demand for, well, ordering things on-demand.

But here’s the problem: On-demand apps require a smartphone to use, and there are still more than 75 millionAmericans who don’t have a smartphone — essentially making this service out of reach.  Older Americans are especially likely to not have a smartphone (or even a cell phone).  We need an Uber for senior citizens!

GoGoGrandparent has developed a way for those without smartphones to use on-demand services like Uber.   It’s simple.  After initially speaking to an operator and giving them your credit card and home address, you just call back and use their automated system, pressing 1 for a pickup at your home. The company hails an Uber, and you just tell your driver where you want to go. If you ever need a pickup at a different location (it will remember where you were dropped off last, so you can request a pickup there), just call the company’s hotline and request to talk to a real person.

GoGoGrandparent charges a small commission on each ride, as well as a $1.80 fee to cover their back end costs. They say that this total fee comes out to about $2.50 per ride on average. A little more than ordering your own Uber, but a small price to pay for the gift of mobility. 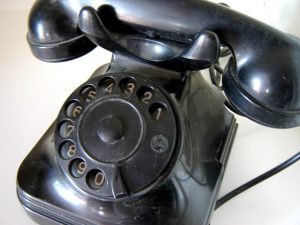 The story of the company’s founding is pretty cool. One of the founders, Justin Booogaard was living with his grandmother. She saw him Ubering so much and asked how she could use it. Once Justin let her know you needed a smartphone to hail a ride, she told him to create a company that would let her use it!

Justin and his co-founder David Lung liked the idea, but wanted to impartially test it, because everyone knows your grandma automatically likes everything you do. So they created a postcard from a fake company and mailed it to Justin’s grandmother, advertising a company that lets you order an Uber by calling a phone number from a landline or dumb cell phone. She tried it and loved it, and GoGoGrandparent was born.

The founders explained that eventually they hope to partner with nonprofits and city governments to offer the service to under-resourced populations, who may not be old but just can’t afford a smartphone. The startup also sees itself as potentially replacing costly and inefficient paratransit programs, which are basically in every major city.

Lastly, the startup wants to eventually offer other services to customers. This could be access to on-demand apps like Postmates or Instacart, home maintenance like Handy or even a caregiving service. These additional services will all provide GoGoGrandparent with more diverse and frequent streams of revenue, as well as potentially large referral fees for the company.

2019-01-20
Previous Post: Advance Medical Directive – Do You Have One?
Next Post: I Need to Relocate For The Sake Of My Health & Safety – Where Do I Begin?

© 2022 Senior Living Options of the Desert, Inc.. All rights reserved.